Ninh Binh is a fascinating place where apart from an inspiring scenery, you have easy access to the most rural and authentic side Vietnam. Here are 19 things to do in Ninh Binh that packed with the most up-to-date (2019- 2020) and reliable information that will help you plan and make the most of the trip.

Mua cave is located in the foot of Mua Mountain, Hang Mua (Mua Cave) is a newly must-visit destination in Tam Coc, Ninh Binh. Coming here, you will be leisurely hiking with 486 stone stair-steps. From the peak, you will admire the majestic panoramic views of Tam Coc with rice fields on Ngo Dong River. That would be the moment you never forget in your Vietnam trip. 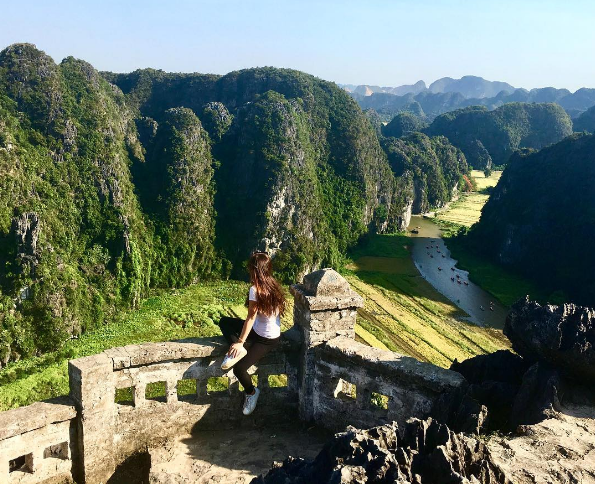 Among the bird species that have been spotted here are the rare black-faced spoonbill, cotton pygmy goose and white-browed crake. Van Long is also one of the last wild refuges of the endangered Delacour’s langur, partly because the wetlands keep predators and poachers at bay.

Row-boat rides (90 minutes, maximum two people per boat) around the reserve are a more relaxed alternative to occasional hawker hassles at Tam Coc. 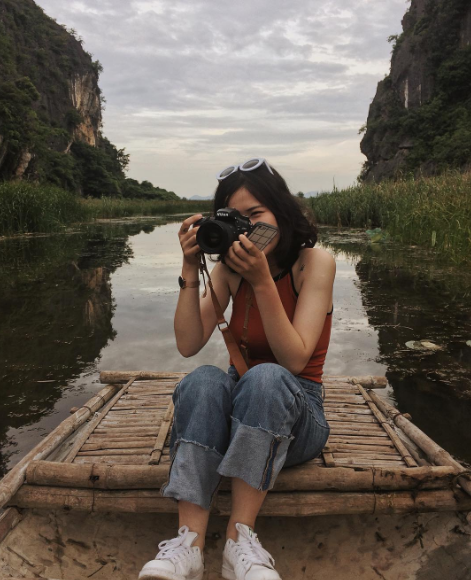 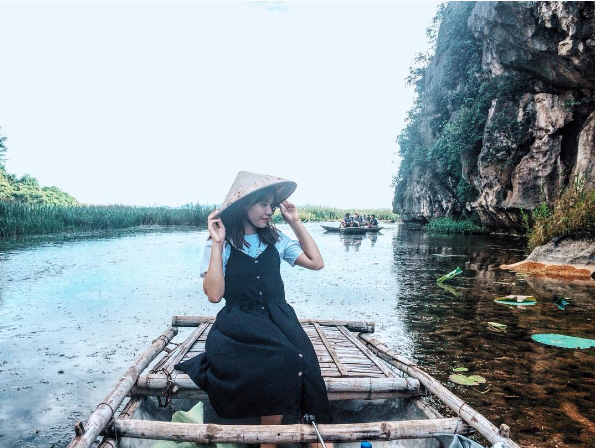 Am Tien Cave is located in the the ancient relic of Hoa Lu, in Truong Yen commune, Hoa Lu district, Ninh Binh province, about 10 km from the center of the city. Am Tiem Cave in the ancient capital of Hoa Lu is the national historic where formerly incarcerated King Dinh Tien Hoang.

The scenery here is majestic, so poetry is hugged by mountains and green trees but still carry a sad, mysterious as still remembered the time of the past remedies law school.

The road to the cave is quite dangerous because most Amanta caves are surrounded by high mountain ridges, a flooded valley in the middle of the mountain.
In order to enter the cave, after passing the gate you descend down a passage on the left hand side and continue climbing through 205 stone steps. The cave is shaped like the Dragon’s mouth so it is also known as the Dragon Cave. 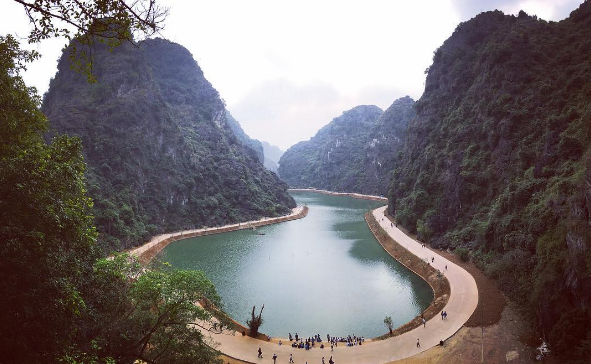 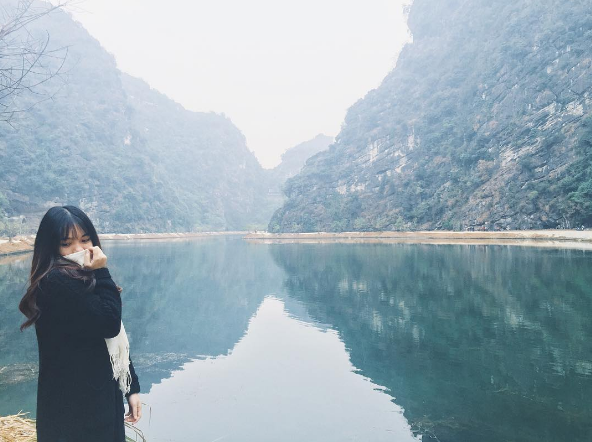 Standing down from Am Tien Temple, you will see the enormous expanse of this majestic landscape with the high mountains and the lush green lake that stretches your eyes.

In particular, you will feel the holy air, a spirit of a historic time.

With limestone outcrops amid serene rice paddies, Tam Coc is best appreciated on a languorous rowing-boat ride, with the soundtrack of the river lapping against the oars. This is a definite highlight, meandering through dumpling-shaped karst hills in a flooded landscape where river and rice paddy merge serenely into one; keep an eye open for mountain goats high on the cliffs, and bright, darting kingfishers. Journey’s end is Tam Coc, three long, dark tunnel-caves (Hang Ca, Hang Giua and Hang Cuoi) eroded through the limestone hills with barely sufficient clearance for the sampan after heavy rains. On the way back, you can ask to stop at Thai Vi Temple, a short walk from the river. Dating from the thirteenth century and dedicated to the founder of the Tran Dynasty, it’s a peaceful, atmospheric spot. 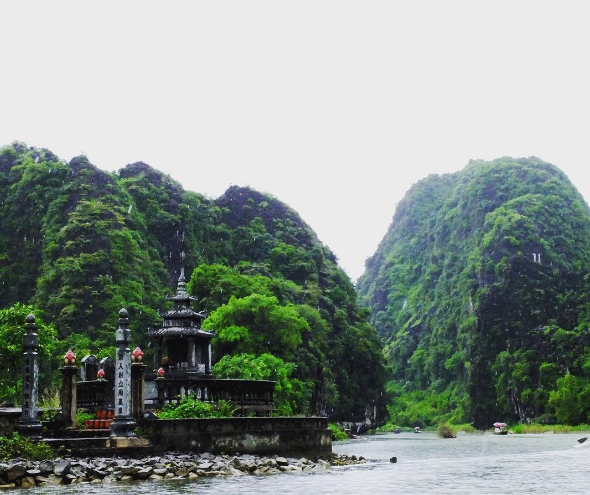 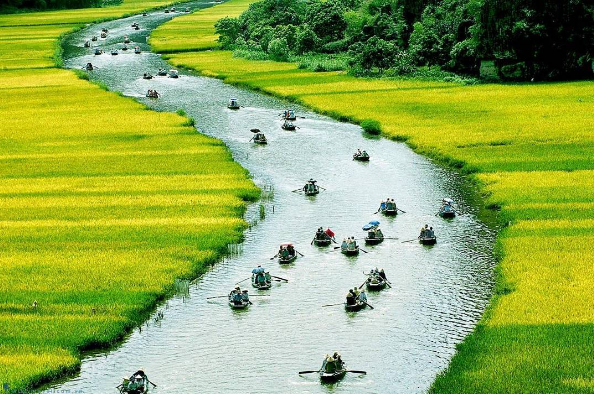 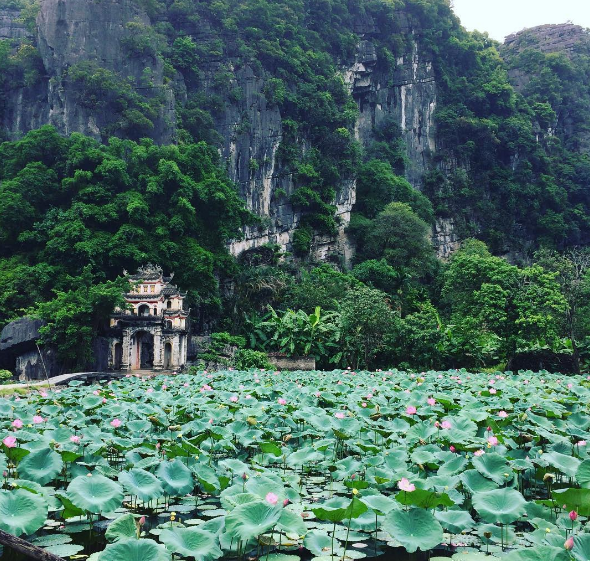 If you have time after the boat trip, follow the road leading southwest from the boat dock for about 2km to visit the cave-pagoda of Bich Dong, or “Jade Grotto”. Stone-cut steps, entangled by the thick roots of banyan trees, lead up a cliff face peppered with shrines to the cave entrance, believed to have been discovered by two monks in the early fifteenth century. On the rock face above, two giant characters declare “Bich Dong”. The story goes that they were engraved in the eighteenth century by the father of Nguyen Du (author of the classic Tale of Kieu), who was entrusted with construction of the complex. The cave walls are now scrawled with graffiti but the three Buddhas sit unperturbed on their lotus thrones beside a head-shaped rock which purportedly bestows longevity if touched. Walk through the cave to emerge higher up the cliff, from where steps continue to the third and final temple and viewpoint over the waterlogged scene.

Located nearby Bich Dong pagoda, Thung Nang or Sunshine Valley is a complex of historical relics and natural beauty which can make easy to get the combination of religious tourism with mountain climbing and ecological tourism. 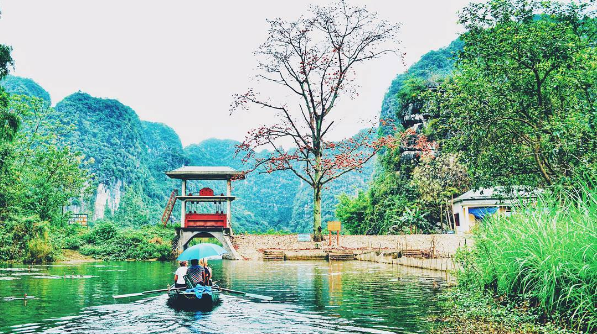 Thung Nang valley is the in the middle of the Limestone Mountains covered by trees that seem to have some hidden charms that need to be discovered. On the way to Thung Nang Valley, we have to go by boat about 3,5 kilometers to visit the holy Voi temple that was built hundreds of years ago. The temple was built of stone with stone altar, stone incense throne, stone flower vase and stone a tray. 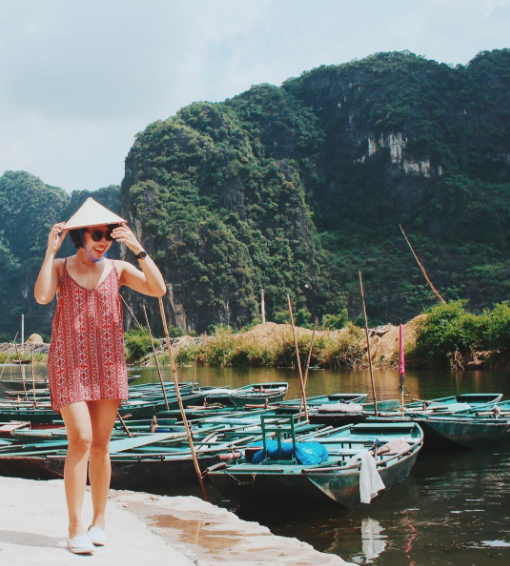 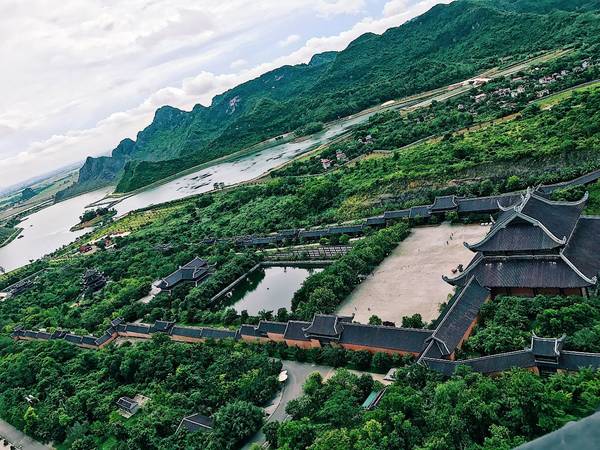 About 150 kilometres from the famous Vietnamese bay where hundreds of islands form a natural wonder is another equally as impressive landscape. This one, known as Trang An, is nowhere near the coast, though. The mountains are connected by rice paddies, not water. You can cycle to them, not sail. And – best of all – they are not full of foreign tourists. Such is the joy of a Trang An boat tour.

Trang An at Ninh Binh is easy to get to from Hanoi. It’s dominated by the large limestone karst peaks which create steep vertical cliffs covered in plants. Unlike a traditional mountain range where the slopes connect to each other in a long undulating stretch, most of these peaks stand in isolation – making them even more dramatic in appearance. 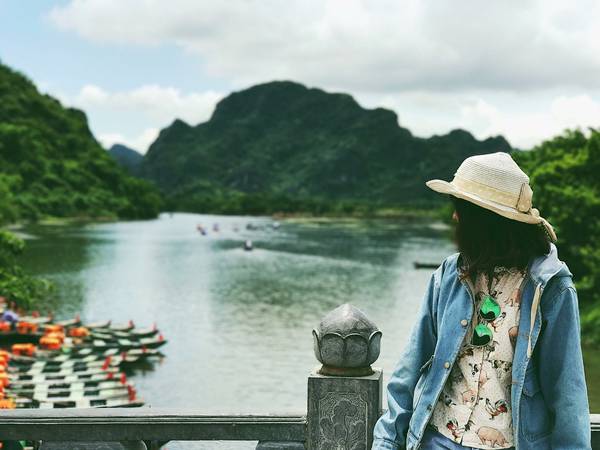 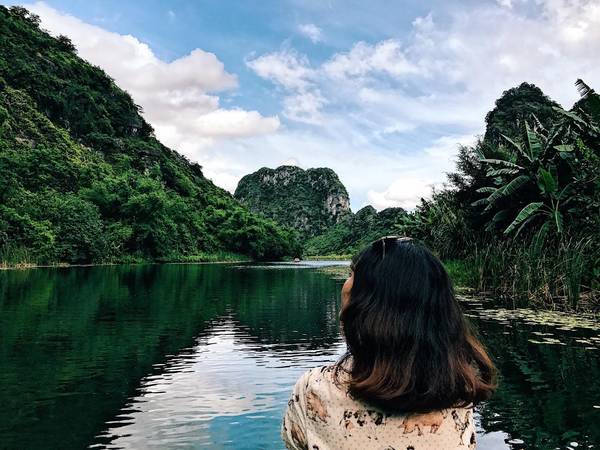 Cuc Phuong National Park is Vietnam’s largest national park and one of the most important sites for biodiversity in the country. It is homes to hundreds of species of flora and fauna. The park can be visited from Hanoi as a day trip or visitors can stay at the park’s lodging for a longer stay. Visiting the park is a terrific opportunity to get a close look at Vietnam’s nature and fees generated from tourism help protect the parks wildlife and improve the local economy. The best time of the year to visit the park is during the dry season, from November to February. 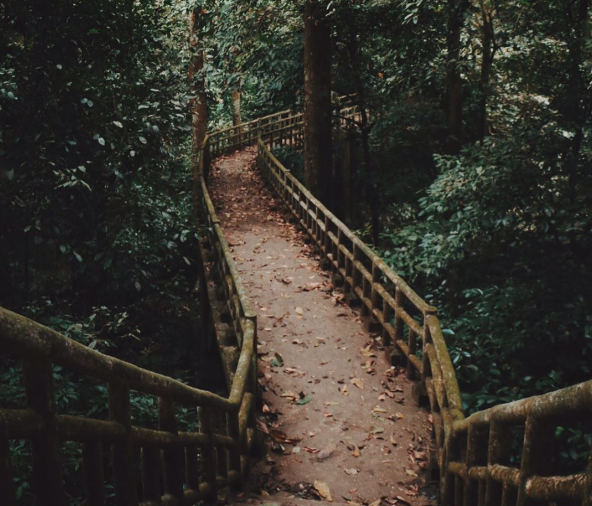 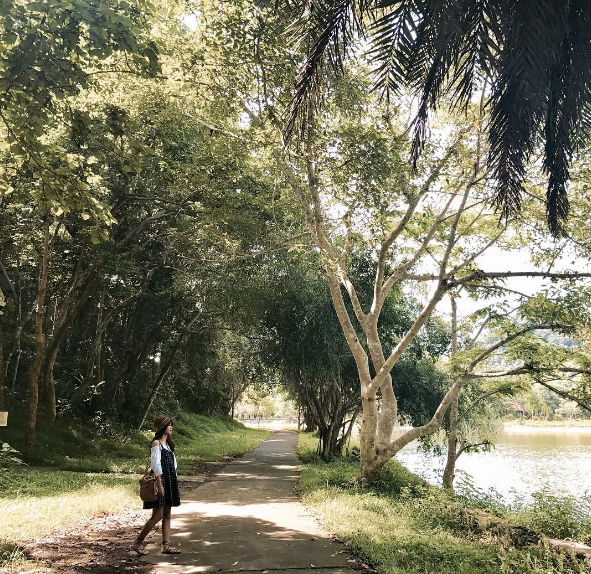 The architecture of Phát Diệm church, built in stone in 1892 is a blend of Vietnamese and European architectural styles called the “eclectic architectural style”. The Cathedral was bombed on 1972 when its west wall, the convents and two of the schools were damaged; after restoration there are no tell-tale marks of this bombing. Although a church, it was built with pagoda type roofs in traditional Vietnamese temple architecture.

Phat Diem Cathedral is considered to be one of the most beautiful churches in Vietnam. 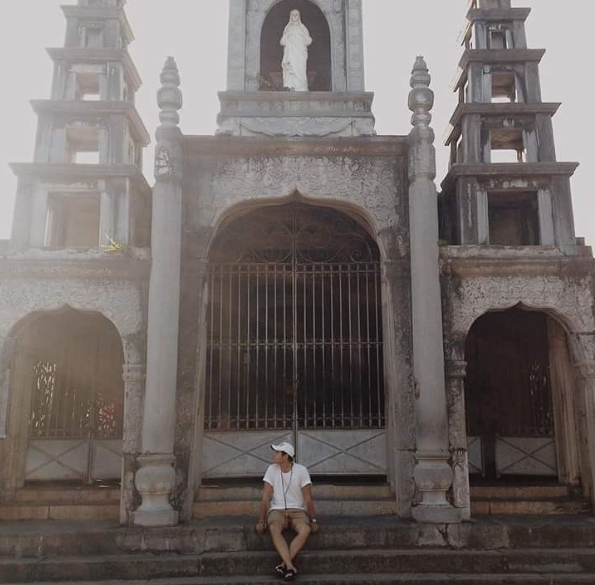 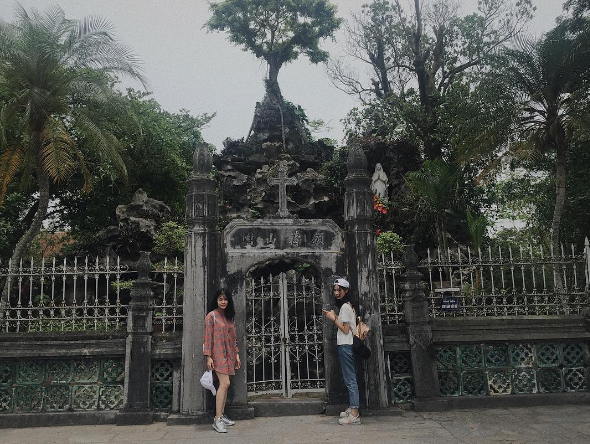 For those who love nature and adventurous bird watching trips, visiting Thung Nham (Birds valley) would be wonderful things to do in Ninh Binh.

Besides watching birds, you can also explore the caves in the mountains as well as visit orchard of tropical fruits, including star fruit, mangoes, guavas and lychees. 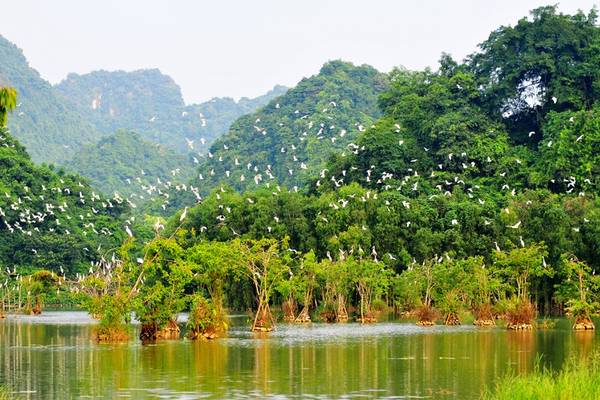 Thien Ha cave is located in Son Ha commune (Nho Quan district), in the heart of General mountain (also called General mountain cavern) at the heigh of 200m. It is 700m long with two area: 200m dry cave an 500m water cave. They are connected by a large corridor.

The dry cave is 2,5 – 3m large, 3 – 6m high with plenty of beautiful stalactites, leading to the southern side of the mountain. The foundation of the cave is 40m large. The natural light from the top, which opens the eyes of people with the stalactites colors. Under the natural hand, there are many shapes and figures of stalactites which inspire the curiosity of the visitors.

Visiting to the water grotto, travelers would float on the underneath river which is named Galaxy which appears with curling line under thousands of sparkling stalactites which suddenly on the right above curl of the cave ceiling. There are also many stalactites under various shapes, which need to be named. In the peaceful place, visitors would feel the sound of the oar striking clearly, the sound of water drop and thousands of bats inside the grotto. 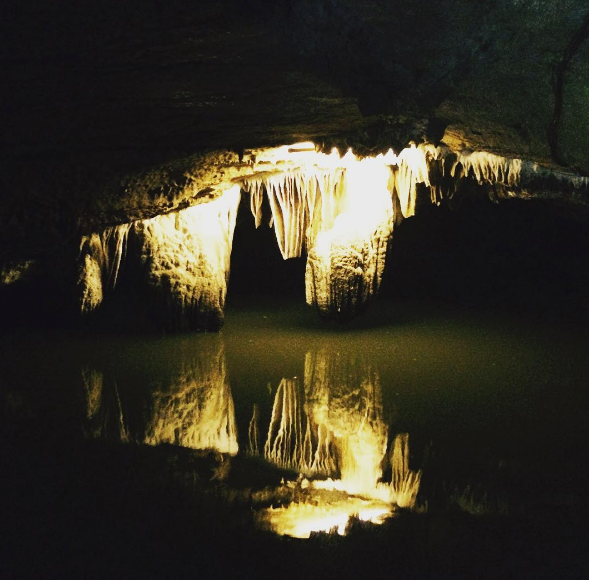 Hoa Lư  was the capital of Vietnam in the 10th and 11th centuries. Hoa Lu Ancient Capital is a special cultural-historical relic complex, attracting the great number of both domestic and foreign tourists. They will have a chance to admire charming natural landscapes, along with precious monuments in the ancient land. 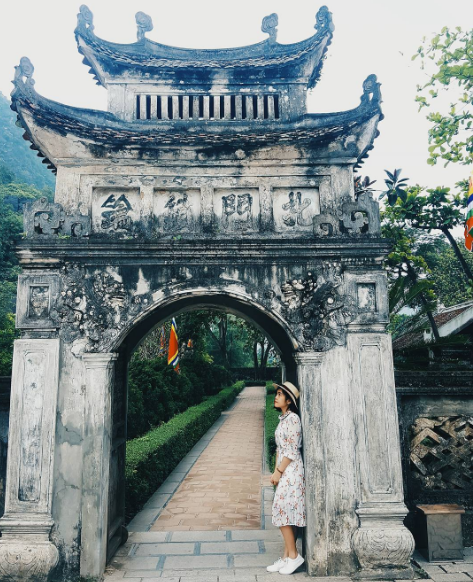 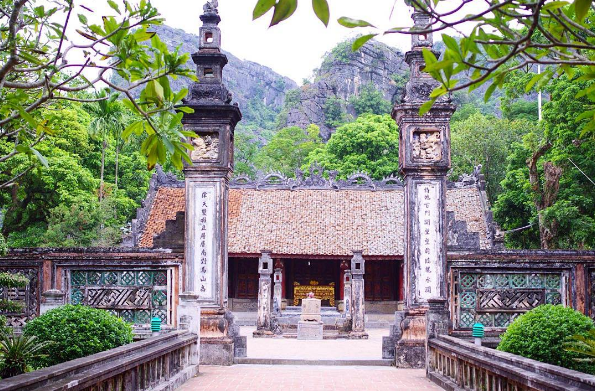 Ninh Binh Valley Homestay is a great hotel in Ninh Binh for those who love natures and want a relaxed time while in Vietnam. The homestay is build amid the vast valley of the tranquil village in Hoa Lu district, surrounded by water and mountains, thus making it a great place for admire the sun going down behind mountains. Even sitting in the bamboo house, you will see the storks find their way back home after a day.

The morning you will wake up to hear the birds singing in the mountains expectations about their small bamboo house, along with sun rays shining down dawn morning lake surface creating a true natural picture perfect 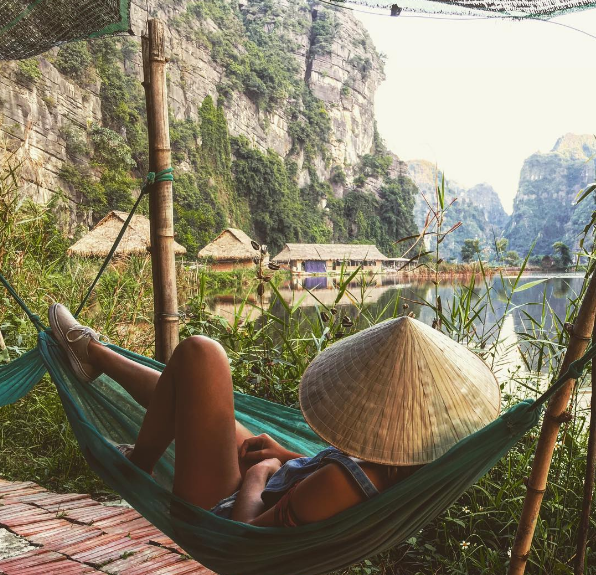 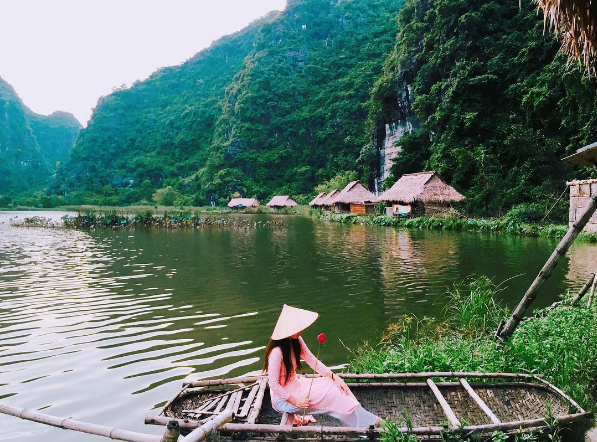 All the bulgalows here are designed with eco-friendly materials such as wood, bamboo, dry leaves, which make it cool in the summer and warm in the winter. At any places in the homestay, you will be able to view to lush green nature.

Where to stay in Ninh Binh | Best Ninh Binh Hotels

Where to stay in Ninh Binh | Best Ninh Binh Hotels

Where was kong skull island filmed?